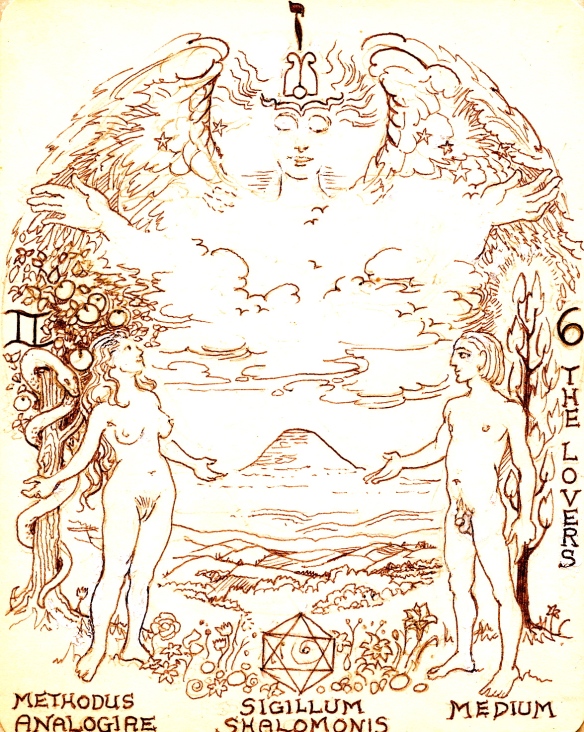 What is detachment?  What is separation?

Detachment distances A from B, sufficient to get a clear view of B, and thus they are in relationship.   Detachment is the noble Buddha nature:  intimacy without entangling. Rafael’s calm clarity presides.

Separation is A tugging away from B, while tightly bound together.  They are blindfold – too close-up to be in relationship:  their belief is locked in separateness, which avoids relationship.   If I stand on a cliff and look down at the sea, I see the rocks, the fishes and the beauty deep down.   When I am in the sea, I cannot see!    When I am climbing the mountain I am too close to it – and struggling –  to see its shape at dawn. 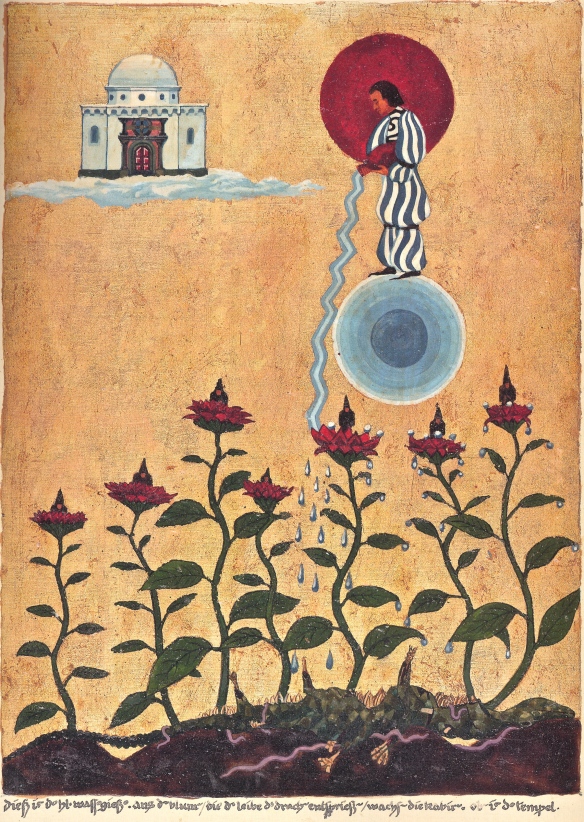 Painting by Jung, 4 January 1920 – Watering Hades. Inscription reads: “This the holy caster of water. The Cabiri grow out of the flowers which spring from the body of the dragon. Above is the temple.”   How Aquarian this is!

In the Red Book, Jung shot down a proud enemy.  He says:  “I forced a greater and stronger one to be my friend.  Nothing should separate me from him, the dark one.  If I want to leave him, he follows me like my shadow … Who succeeded in crossing the borders of this realm with good grounds, pure conscience and obeying the law of love?  … Who is it that tore apart his own heart to unite what has been separated?”

He turns to meet his Shadow. “He will turn into fear if I deny him …  In that I accepted myself, I divided myself into two, and in that I united myself with myself.”

As in The Lovers, Tarot Key 6, whose hebrew letter is ZAIN, sword-tip, he parted his selves with the blade of discernment and turned them to face each other openly:  to dialogue reciprocally and become united.  The sword tip moves deftly, to un-mix things. It separates ingredients so they stand in relation with one another.  It reverses co-dependency – when humans are mixed up with each other, they cannot see clearly.

In this picture-story, I abandoned drawing (and writing) with my right hand, and started to do it with my left.  You can too – and see how it feels. 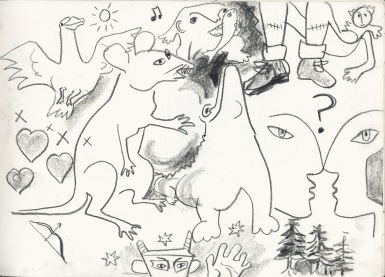 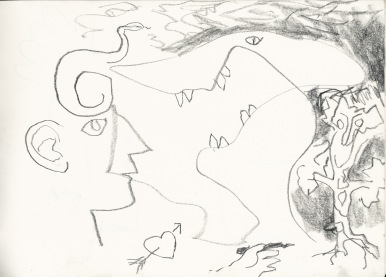 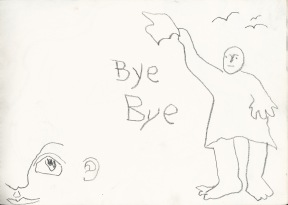 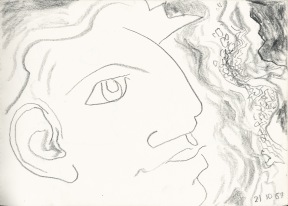 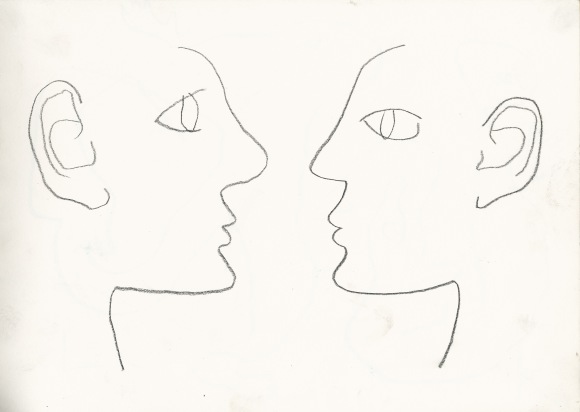 Detachment is lucid union – a major achievement with one’s shadow, as with the beloved!  We turn to look and see.  Be still and know that I am.   This is not easy when the gut is churning or worrying black soul-nights.

But we turn (metanoia) to see.   To see is to befriend.   This beautiful word metanoia means “repent” – whose true meaning is “to turn and learn.”  To turn … is choosing and letting in the Light. 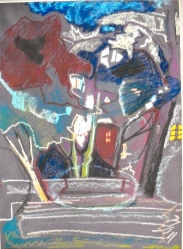 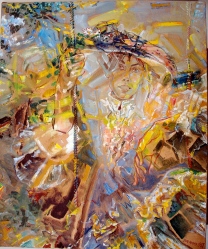 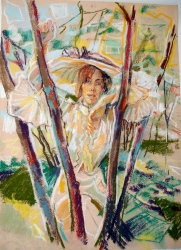 Unity is not alone.   Unity is dialogue, the passing to and fro of Being.

COPYRIGHT – All art and creative writing in this blog is copyright © Janeadamsart 2012-2014. May not be used for commercial purposes. May be used and shared for non-commercial means with credit to Jane Adams and a link to the web address https://janeaquariel.wordpress.com/ 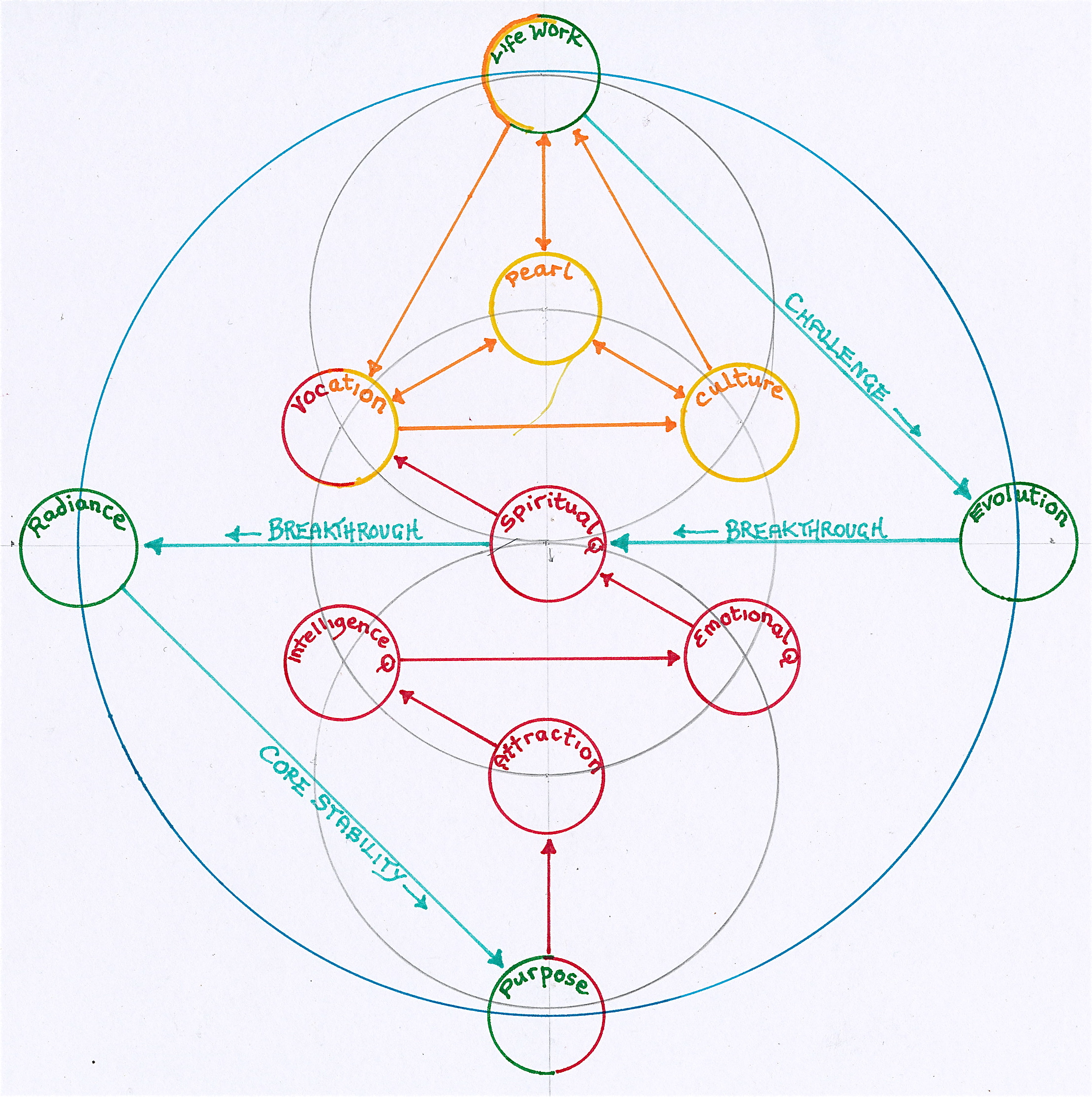 COPYRIGHT © Jane Adams http://janeadamsart.wordpress.com 2012-2013. Unauthorized use and/or duplication of this material without express and written permission from this blog’s author is strictly prohibited. Excerpts and links may be used, provided that full and clear credit is given to Jane Adams at http://janeadamsart.wordpress.com with appropriate and specific direction to the original content.