“As above, so below. That which is above is like that which is below.”
(tablet of Hermes, Alexandrian tradition).

We rise and fall – Unite together the Higher with the Lower – heaven with earth – to realise in its full glory, the One Thing.   Let all obscurity depart.

Friendship in an evolved family situation cares and is neutral at the same time. It is alive between and behind the lines – as a principle at work among family members, through  individuals. The various transactions may pass through and be witnessed, without obstruction. 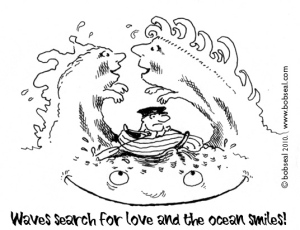 Any relationship may potentially obstruct and alienate itself, through the projections it throws up – as waves meet on the surface of the smiling sea, and break. Each relationship carries past history and broken hearts: the subconscious parental scars and stresses to realise and resolve, are mutually attractive forces. But the same waves as hands clapping, pass through each other, and release health-giving ions like photons from the deep: collisions of vital energy: the salt of the earth.   This is how we love. 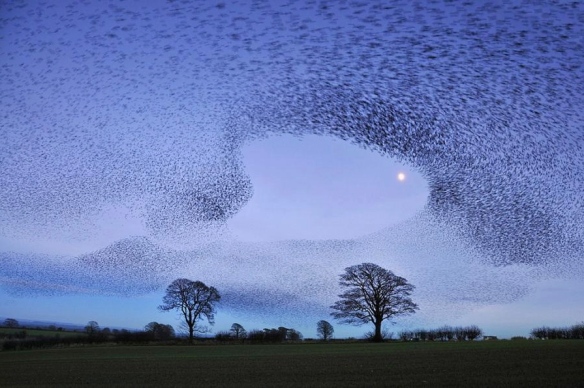 A  family carries the same principle as a murmuration. (A spiritual or martial movement does the same.) A murmuration is a flock of birds forming fish-like patterns in the sky. The murmuration carries single birds in a singing cloud, constantly changing its shape, and greater than the sum of all its fluttering parts.

It is the same with the cells and all the moving parts of the body: the individual element serves the greater, in the natural state. Joy is a dissolution of conflict, as waves become the sea. Conflict arises, settles, changes and vanishes.

No individual fixes things – the transcending movement is their outcome. Yet individual effort and awareness in that same movement, relating to other members, is crucial in the way of love.  Awareness of the moving centre through temporary discomfort or imbalance, is a human privilege … of vision. Efficiency is clarity – like sifting diamonds from among pebbles.

It is efficient to part the ingredients so they are in relation, and may be discerned. If we only stir the emotional cauldron around, everything turns into soup and blurs … and the heavy world complains.

and Letting in the Light –
https://janeaquariel.wordpress.com/2014/09/06/letting-in-the-language-of-light/ )

“I too am human and I care and I make messes because I care.”   As soon as this level is shared it opens the other person’s heart and comes away from the Operatic Aria in the mind – dives into the heart, picks up the phone and goes … whew. What was the fuss about?   There is love and the cosmic joke. Love connects.   Love is the ocean’s smile beneath the waves.

There is enormous fuss around trying to get things right, trying to say things right, to do what superego says is the Right Thing; and the attitude of trying to be “unselfish”, by saying – I am to blame, because I am not good enough – trying, trying, in all seriousness:   the high-&-mighty persuasive blinkers.

It is the habit of an esoteric life (studying the teachings etc) where integrity matters deeply, to live in the centre of a village, by its fountain, but invisible to many of the villagers.   It takes a long time to feel safe enough to voice what is on my mind.

“Oh, leave the young people alone, don’t interfere, they will work it out, you’ll ruin it” – yet without strength and coherence of family feeling, they are overboard and on their own. A family or community blends a diversity of experience – a firm wood to grasp – with the patience and willingness to wait.   Conflict is this resolution.  When we are left alone with no previous experience of love’s rugged rocks and no smile or shared concern or pricking of balloons – we suffer the inefficient injury and get hit.

Sacred India Tarot – The Ashwins: Twin deities of the Sun

I see a powerful pike-fish among the community of goldfish or minnows. It doesn’t eat them:  they swim near its jaws, like pilot fish with a shark – the most streamlined creature in the world. The powerful fish is the water of life and how it flows.   Flick! its tail.

Discretionary confidence  is a delicate, precise skill, this way and thataway. It dips oars right, left, as the kayak (or pike) slips and glides along the veins of water: responding to rocks and currents and eddies.  Behind and between the lines of life, this freedom – to move, to care and to see – creates the flow.

A Note on Occult Societies

The loyalty to our first teacher is life-long. People who break that essential loyalty and blame their first teachers, lose the game and become bitter.   Our first teachers can be extremely difficult and enigmatic, and even they might go wrong; but what we learn from them – or from being cast out from their protection – is pure gold.

So there are goldfish in the dark waters.  The goldfish is an old Persian symbol.

The occult is the study of depth psychology and (when it darkens) how to use it as a power source. Occultists on the path of light, study the universal workings of nature and the soul, and are humble before the Holy One. Some occult societies however, lack self study – the wheels, nuts & bolts and workings of the human undercarriage. They may instead glamorize the concept, awarding it to members through ritual. This is a narrow valley of “I think I know it all, therefore I have a superior position to you, and a secret password.”

It is  a human tendency to dogmatise:  to say “I am this or that”.

Respecting an occult movement in spirit – although disagreeing with individuals who administrate it – carries the theme of the powerful pike-fish and its flow and flick of tail. This isn’t about leaders, but the principle. Such a society may become doctrinal, dogmatic and rigid – regimenting sexual and family relationships among its members. That is like cutting off a supply of oxygen. It usurps a vital human interchange – the genetic pool – in its physical, social, psychological and spiritual dimensions.   Yet it maintains a strong spiritual body – the intentional power of the sacrifices people made – which reaches down into all its efforts and economy.

Occult societies who built a power base, make their members co-dependent for their sense of worth, keeping them hard at work for self-development. The principle of “the whole is greater than the sum of its parts” – like a starling murmuration or school of fish –  is simple to obey and energetic to follow, but when a manipulative hierarchy develops, it confines itself. If a member should question the hierarchy and its methods, he or she is ostracised,  made to hand back her seals of authority, and expelled. The slogan is, “by your selfishness you lost everything you learned or achieved with us.”

She may be cut off socially, as her former friends, colleagues and companions in the society no longer speak to her or recognise her.  She may, cast out onto the sands of time, carry the old loyalty through into a transmutation – to ride with the human spirit beyond artificial frontiers, and care for the children. 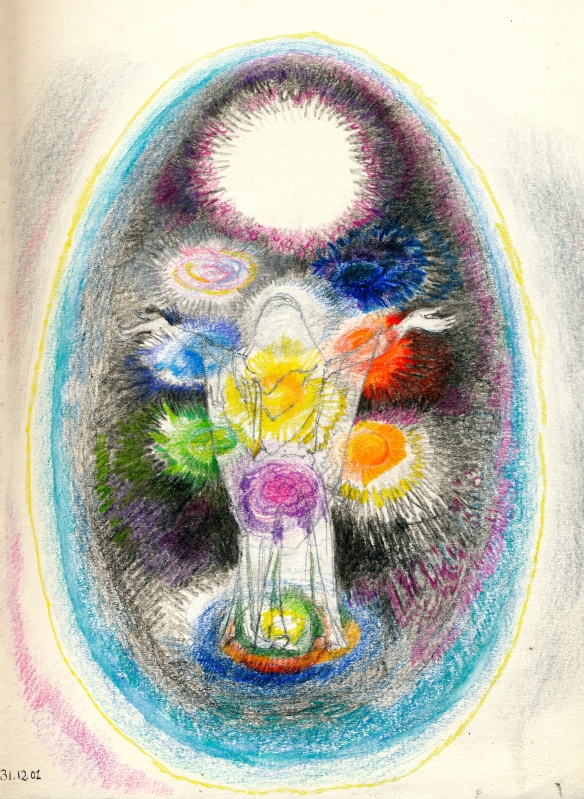 Love is an energy of solar power, entering hearts and issues through family fractal lines. Love transfigures situations as they turn in the light.  Solar transmission – the alchemical Work of the Sun – travels in all directions of space, unlike the lunar which is bi-polar.  The Work of the Sun is a leap of faith beyond the prosaic.  Unselfish love persistently overcomes the selfish.

No human being is perfect.  We all are working on our stuff: “I am human“. 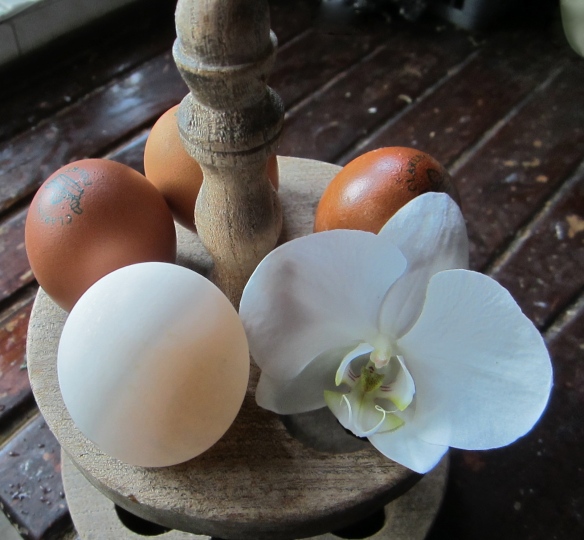 COPYRIGHT – All art and creative writing in this blog is copyright © Janeadamsart 2012-2015. May not be used for commercial purposes. May be used and shared for non-commercial means with credit to Jane Adams and a link to the web address https://janeaquariel.wordpress.com/

2 thoughts on “Reflections on Family”