Revising some older writings of ten years ago, I came across this, as it speaks to me today: 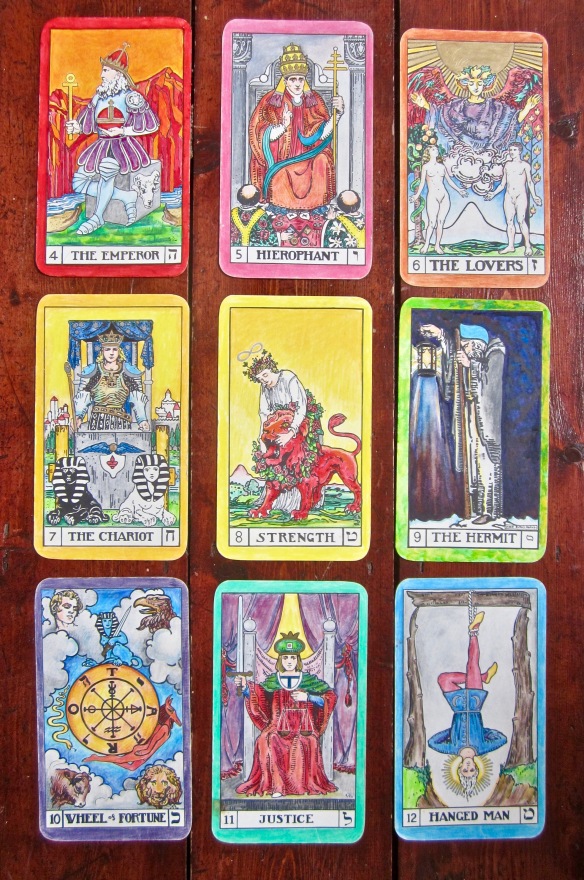 “In quietness and confidence shall be my strength.”  Invariably obey what the Inner Voice suggests.  As my personal drama slowly erodes, the power of life begins to shine through, like a giant gem long obscured by river silt. This is the true meaning of the rock which moves!

I noticed … how the teaching and design is expressed through the centre Key, which influences the Keys encircling it. Key 8 in the centre awakes at once the interior peace which both eclipses and illumines her cohorts – they are just pictures.   The idea of a shield or enclosure disappeared.   The need to use words is replaced:   just look. 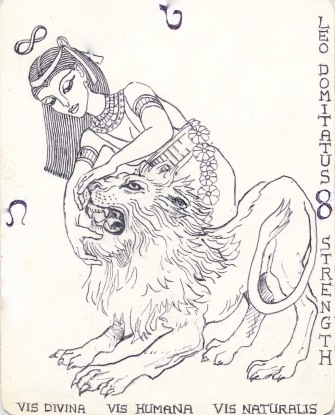 All occult and eastern teaching is aimed at:  quietening the mind.   That’s all.  In His strength is my peace– a Bible quote. Strength is Key 8, as visually and verbally suggested.  The quality of strength – as the Hanged Man has entered the picture – is without stress.   This quality is contrary to worldly angst and political way of thought: a revolution. Effort drops naturally into place.  Sitting down rather grumpy, and feeling the truth flow through me, frees me at once from my anxious vanities.  The truth is infinite, in every direction. It is a prize, yet inescapable! to be this function.  Writing doesn’t tumble through my mind.   It comes slow, phrase by phrase, for my Companions of the Light and I adjusted the dictating speed.   And I hear ISSA, and like Mary in the house of Martha, I no longer worry about how I’m going to get things done today! 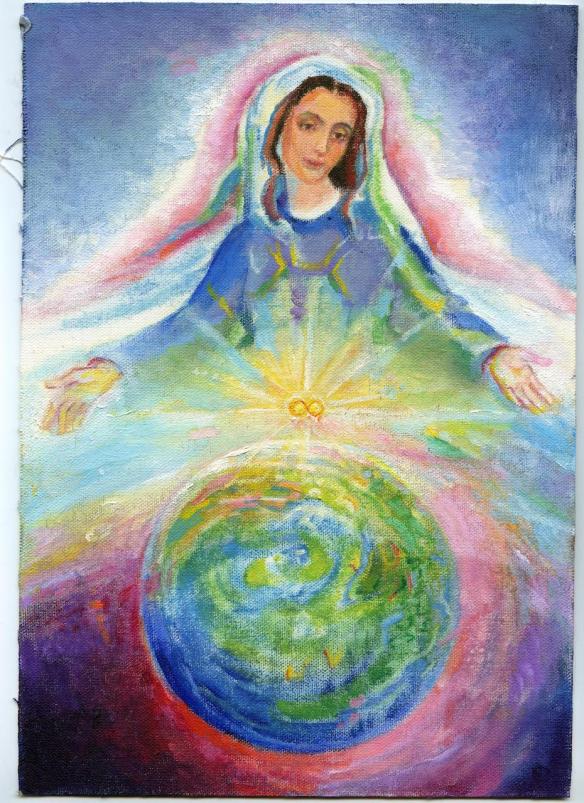 The point at which the Worlds move through each other, is peace.

My real understanding is ahead of me.   It receives enough from the picture, which I don’t know yet how to spell.   And I need not spell, for it informs me anyway.   Now I am the pre-literate child.   Maybe, as children, we know far more intuitively than we will when school cages the lion cub in alphabets and sums.  When we learn to read, that dimensional and un-booked memory is lost.

Yesterday – a conversation with George, a fellow poet. We worked right through ‘the Lens’ together.  I agreed with nearly all his suggestions for trimming lines and revealing the meaning more clearly.   Best of all, he – a linear mind – understood all the important bits.  The dimensional imagery is clear to him.   It “quickens” him eagerly.

This is what my poems and works are for – to interact and self-improve with others, and indeed to receive mutual strength of perception:  dialogue.  This function transcends the publishers coffin.   He reminded me that Coleridge and Wordsworth constantly improved each other’s.  My works are not set in the printing press.  They will always have small flaws. They have reached the point at which – like the limestone cave image, stalagmite to stalactite – a place of meeting happens.   This gentle interchange is STRENGTH.  From it flows a path of miracles.

The point at which the Worlds move through each other is peace.  It is my synthesized child perception.  It has no history, nor sense that day by day I shall improve.  It just happens and is.   I have toiled over all my manuscripts simply so they are available to meetings of the soul, and can go on being perfected.   The Stone of Life is in a constant asymmetry of perfecting.  How can my vessel be otherwise?  And how can my physical chamber be other than a semi polished rock?

The small flaw is as the child is in the grownup world.  I don’t want to tout an Inner Child – this seems to me rather naff.   The small flaw is my reality as an alchemist.   The synthesized child perception is the result of turning what I learned as a grownup back into the Yorkshire harebells – how I imagine my pre-school liberty.  At this point of meeting, the Philosopher’s Stone glows, the river flows, I grow, I grow wide.

I cannot do other than acknowledge this point.

With this clarity, the point – the fluid precious Stone which gleams like a star – has nothing to do with egg-on-face, narcissus or vanity, though these problems often veil it for a bit.   It just is.   As I realised long ago, Self-enquiry tends to dissolve mental construction.   Self-enquiry is a black hole into Star-hood – star-being, star-born. The unpublished literature of heaven, is full of Willie Maddisons and Richard Jeffreys …!

The point yet – as I write of it and from it daily – engages me continually in the task of words.  The human world is words at the moment.   I am human-embodied.  My writing leads me to the point, like a sentence to full stop.

The point where I am, IS.   My job is to tend the root.  Ta-Root. Tarot’s provenance into the neighbourhood is handled by the Elohim.

Instead of credo in unum deum, I could say thou art I am, or that thou art.  TAT TWAM ASI.  Thou art God.  This honours Hebraic and Vedic traditions, and has no box.

The law of the Sun is a photon-lattice whose appearance is stars – galactic stars.   The photon-lattice is a web.   This web penetrates the entirety of life, as interconnected filaments. ISSA as Jesus, walked on it as water.   Self-knowledge in the web makes a little pressure in it, which influences the photon paths around it.  I mean now, the inner photons of the astral airs which envelope and swirl around us.  We are not solid beings.   We are atomic receptivities, with inter-stellar space around each particle of blood, bone and flesh.   Self-knowledge in the web is a spider.   I spun my beautiful careful infinite web around and around, and here I sit, and sometimes a fly comes called George.   But I don’t eat my flies.   They fly from my web and they too are spiders and spin.   Look at the myriad mandala webs, each one a star!  This is how we are.  When they talk of the 36 LAMED VAV righteous ones encircling planet Earth with a golden net to defeat the dark brethren, they actually refer to these conscious strands – mostly unconscious – within each one, ourselves, under-earth. 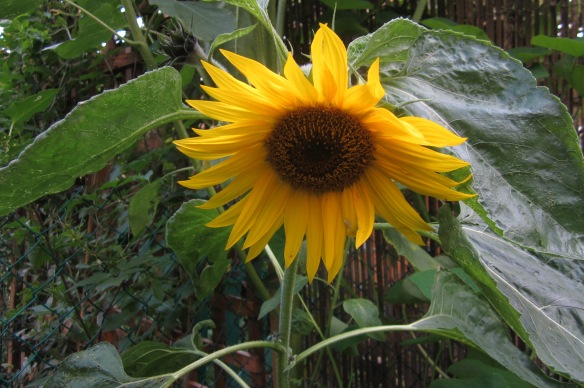 Every single struggler carries the thread of gold.  The thread of gold is all of us.   Even in the shell shocked who are now feral thieves, murderers, religious fanatics and robbers of  wealth.   In them it is buried.  In them it is coffin sunk, but it is there.   Now, the golden thread is, in the Astral Light – the imagination of human nature – a coagulant.   It coalesces and essentially is projected as the Masters or Magidim:   the media of God.   For God this golden thread is.   Such ideas stretch my soul.   They are apparently few in number, but their compass is unlimited. 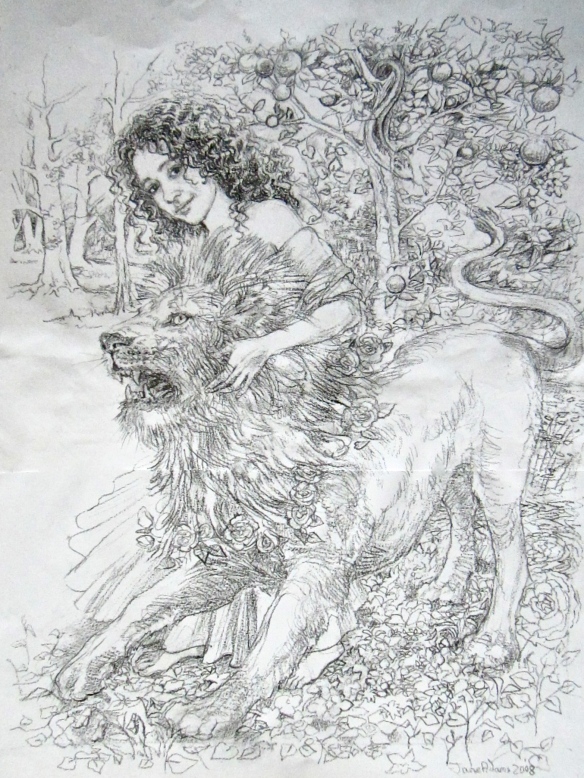 The colour of this Key is gold – the secret of the works – and golden threads appear today as they do from time to time in my laboratory:  the seams and veins of the Sun within the rock – the Stone.   Taoist sages confronted with the immensity in their humble muddy lives, shrug and say “who knows?” – or nothing at all.  They go on crossing the Great River.   This moment in the world is unalterably transcending.

The moment comes independently of any surface condition or mood.

Simple inner silence with the beloved is itself orgasmic in a highly subtle way, the unending and unebbing power of the Sun.

I was shown a picture of the surface of the Sun – a detail of about 60,000 square miles.   It consists of billions of filaments of fire power, like waving hair, each “tube” is an entire landscape across, each one connected to every single other through the root.   Thus, we are.  Thus, we are the Sun’s action: and thus, the embrace of the beloved, and the sexual know how.  It is unending and unebbing, here this moment.    Tiny planet Mercury is a dot.

So much for the scienticks’ big bang which starts and stops a sentence!   Just one sentence in the Book of Books.   One sentence is what I and I and I travel along each lifetime, existentially equipped.

The intuition of the Sun’s threads advises me that there is more in human-earth’s apparent disasters than meets the eye.  Unimaginable resources are there to tap, and are in operation.  What we see is the collapse of a house of phantoms into Reality.  Cosmic law from time to time enters spring-clean mode and raises the dust.   Consciousness IS THE Sun.  Evil is the forgetting of life.

How close these words are:  forget and forgive.  One of those rather stunning paradoxes of relative pressure.  Forget and beget come from the same root, as do forgive and forget.  As evil is live in the mirror, it suggests that a principle was forgotten and became distorted and turned to lies.   This force competes with the power of the Sun, but only to a limited extent.   The way to meet Old Knickers is to laugh at him and turn his pentacle round:  then his bat wings fall off and the Archangel appears.  We all know how very difficult it is to laugh at ourselves in full spate, or at torturers.   Evil – in my perception as far as it goes – is a chosen obscuration of the light. This version overwhelms and destroys and fantastically wastes time and energy:  but there is no thing which is not God. The metanoia realises. 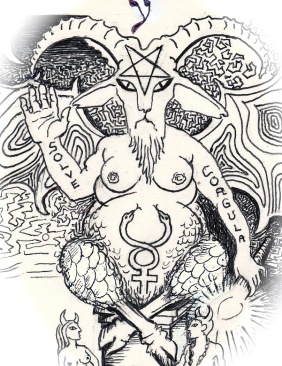 The Shadow – God as “He” is conceived to be, by the ignorant 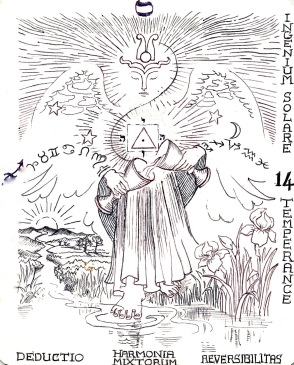 The Great Invocation says “and may it seal the door where evil dwells.”  For door, read literally, mouth.  For the chosen form of speech to persuade, may manifest as evil.   To seal the door, suggests disabling the mouth which would harm, from speech, or from being listened to. 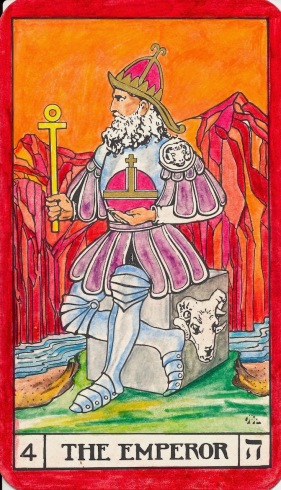 This week’s tarot Square and realisation is coloured by the Hanged Man who signifies Completion of the Great Work.  It is headed by the Emperor, in whom as Aries, the Sun is exalted.  He has the reasoning power.   The Hanging Man has the profundity of the submission.  Note:  both have their legs crossed in the same way.   Both form the symbol of Fire, and in Key 12 the fire inverts, turns blue and becomes the dew, with a silvery aureole.

Now this detail of the fire which flows and the water that burns, is itself the Whole – through the diagonal of 4,8,12.  What beauty.

Fragment from poem “The Lens”:

Drawn up into a
dark cave whose glory drop by drop
the rain through aeons carved,
as stalagmite to stalactite
my soul evolves
from floor to point of meeting.

Not by earthly measure large, this chamber –
by a candle illumined: a single drop, a sea.
In limestone cave the work through ages dark
as organs of our inner body, gleams.

Hollowing this Gothic sphere, I am
the ages’ hourglass –
an instant yes, awakens sight:
the hallowing fire.

COPYRIGHT – All art and creative writing in this blog is copyright © Janeadamsart 2012-2019. May not be used for commercial purposes. May be used and shared for non-commercial means with credit to Jane Adams and a link to the web address https://janeaquariel.wordpress.com/