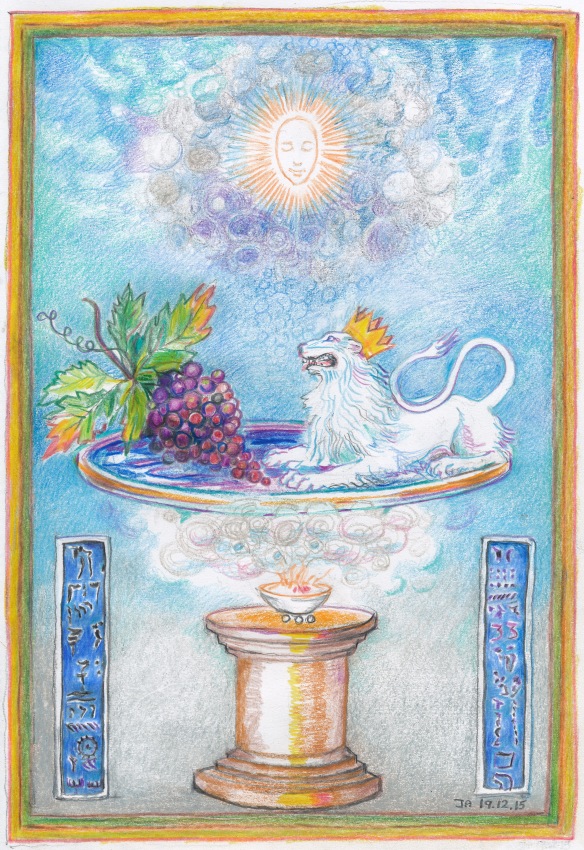 This post continues my improvisations on Master R’s “The Most Holy Trinosofia”.

I copied the above illustration from the Trinosofia facsimile book which is available online in colour through SCRIBD.  The reproduction quality online is not sharp, so I had to guess at the hieroglyphs on the side panels.  Otherwise I use the book “Most Holy Trinosofia” presented by Manly P Hall, and published by the Philosophical Research Society in 1983.  It has poor quality black and white reproductions of Master R’s (copied) paintings.  His art was witnessed, but disappeared mysteriously.  He left nothing in his name except for his music and some seminal writings, yet he is everywhere

As always, the best way for me to understand a symbol and to make it my own, is to earth it by drawing, to love and recreate it in this way.   Poetic license enters;  the system is not rigid, but evolving.  The grapes kept reproducing themselves as my pencil turned. The background in the original is plain, but I gave it a Beriah (world of Creation) sky colour, blending to grey, the silvery tone of Hokhmah, Wisdom.

The altar in which the secret fire burns is Philo Sofia, a lover of wisdom.

To read the chapter itself, and Hall’s commentary on the text, open Trinosofia Texts in the black title bar of this blog, and scroll down to chapter 8.

First, here is what I wrote about the painting and its imagery, in my earlier studies:

Journal 16 September 2003
Well, the day is passing, and my stream no longer running. But I read again yesterday the Eighth Stage of Trinosofia, with Manly Palmer Hall’s help.

The blazing Solar genius is clouded from the profane. The initiate goes into a room, and sees above the altar, a painting on the wall:  in it, the white lion wears a crown of seven rays, and is dignified. That means light, before the rainbow refracts it.  Hall’s commentary: “This is no longer the despotic lion of the earlier illustration.  Ambition has been transmuted into aspiration; and that impulse which, unregenerated, lures men on to temporal destruction, is now the force which bestows courage upon spiritual enterprise.”

The bunch of grapes – surprise – is a symbol not only of Mars (see previous section when the gifts are given), and of blood, but has a special affinity with GOLD. The blood carries within it these particles of the sun. Initiates of a School grow together on the one branch – the Golden Bough! We are a group Soul, as I have ever known. The work of the one blesses the brother.

The righthand panel reads “Kindle a light at the appointed time – the seventh hour of the dawning. Fire comes forth at noon.  Dance in a circle, and prophesy.”

Hear also by resonance with noon, the Hebrew letter NUN (which actually means little fish, or sperm, and also “to sprout”). The intuitional genius, or secret fire of the Scorpionic well, mirrors the Solar disk. The dark lake which the initiate will cross to Stage Nine, is a Scorpio teaching, and so is the death, putrefaction and resurrection he will encounter there.

The lefthand panel reads “Honour is paid to the Giver of Life.”
“This is the voluntary offering up of the personality, the KA. The number 9 appears, and the ark or coffin in which candidates are buried in the greater Mystery. Then the full face of the Sun appears, as resurrection, as the KA ascends through the gate of heaven.” (MPH’s Commentary)

I understand: the persona belongs to God, and is returned to me with this in mind. This panel describes the passage of the soul – KA – through the invisible Worlds as set forth in the Pyramid rites.  “In a certain degree of Scorpio, the Hierophant would release his disciple’s KA into the Amenti.”   Note that the white lion and the grapes both rest “on a salver sustained in the air by the smoke of a lighted brazier” upon a round altar.

The altar he saw under this picture was the stump of a vine. On it was strewn a pile of shining salt. Salt grains form perfect Cubes – the symbol for mercurial gold at Kether. “We may change into spiritual gold things which are of all least precious, even the refuse of the earth.” (Eliphas Levi). 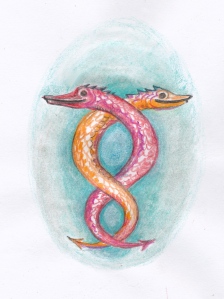 The salt of the wise is derived from experience. The initiate salts himself, he rubs it into his skin, just as they salt fish to preserve it – here comes the letter-NUN symbol again: the Fish. He pickles himself in wisdom’s wine, Scorpio steeps.   The wise man’s salt cannot decay. It “bleeds” as a pure white salt from the cross-sectioned concentric years of the vine root.  This is the inner white light that arises from the dark well. The vine root is the well. As the Water of Life triply distills, it projects through evaporation, the salt.

Copy of a painting which heads Chapter 8.  M P Hall’s profile is to the left.

(To read more about the yeast and grape symbolism with Master R, and the sonnet by him, go to this link:)

December 2015
Now the white lion and the bunch of grapes emblem the essence of personality, and the sun is encircled by grape-cluster clouds like a bruise;  it is said to be veiled.  The white lion and the grapes are on a salver heated by the secret fire: the altar for the fire is a “cut vine”.  The vine is pruned back repeatedly, to force the flavour of the wine.

The altars in the Trinosofia paintings look like cotton-reels. They are pedestals for the sacred fire. 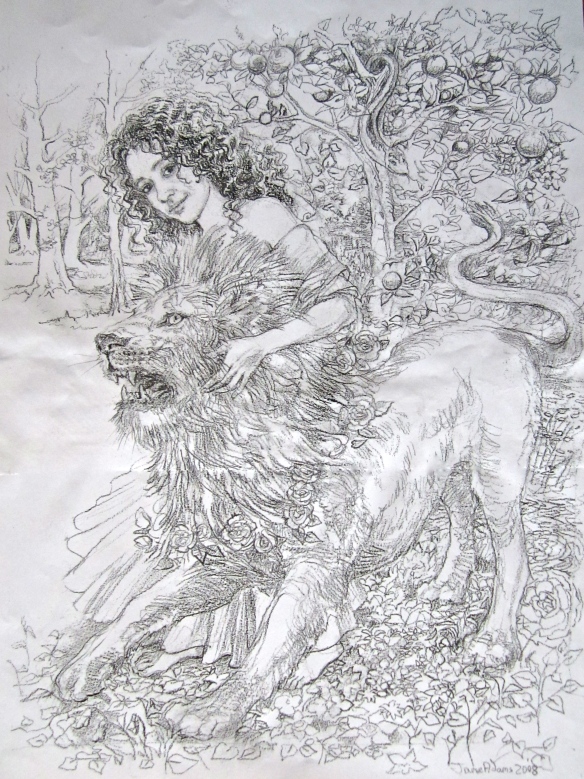 In the Tarot Keys, the Red Lion (alchemical sulphur) is Key 8 – Strength – knowledge of the works of magic, a secret knowledge: “Change the pattern and you change the result – make it accurate, profound, courageous, positive. Then you tame the lion and he becomes your servant.” (P.Foster Case).  In fact the female is these things. The lion is the raw sovereign force of nature being tamed; the roar becomes a song. This all happens around the woman’s belly which is hidden by the lion’s head and open mouth and rose garland. Woman’s speech is a silent power from her inner cave, to bless the children of the world she births. We are shaped in these strange ways to know the openings and speech of hills and valleys and rivers. The current flows without a word.

This is how I see Key 8 – the lion’s mouth is her inner cave. Knowledge of nature is parturition.

In the Trinosofia text of section 8, there are two doors. One opens onto a desert with a hot dry wind. The other door opens onto a wide lake with a rocky shore, and at its extreme end, a black marble facade. The Arabian-style inscription on the bridge across the lake is “the strong to be subdued”.  But the bridge is too far away to reach along the rocky shore, and so the initiate sets to and wades. This means he takes his salt through the element.

It takes 13 days to cross the lake of Scorpio’s coagulant dark water.   Nowhere does he wade deeper than the knee, but the water is like cement.   This must be the density of the slow moving snake.   This process through Scorpio signifies my steepings in my life-experience;  and in the painting, the white lion and the dark grapes rest on a lake.

Rub it well in! This too shall pass.

Here is the gist: you wash the rock and gravel through a sieve, to extract the gold.  Gold glitters like particles of desert crystal. Gold melts to solar water. Gold brings itself together, and flows.   Then we are dusts of gold, and He is making with us, gold leaf.

Be lovers of gold. Watch what shape it takes as it falls from the sun.

The treasure in the land: engraving from alexander roob’s alchemy & mysticism

Song by Master R – “O wouldst thou know what Sacred Charms ...” xeroxed from the collection of his music in the British Library

COPYRIGHT – All art and creative writing in this blog is copyright © Janeadamsart 2012-2015. May not be used for commercial purposes. May be used and shared for non-commercial means with credit to Jane Adams and a link to the web address https://janeaquariel.wordpress.com/

COPYRIGHT © Jane Adams http://janeadamsart.wordpress.com 2012-2013. Unauthorized use and/or duplication of this material without express and written permission from this blog’s author is strictly prohibited. Excerpts and links may be used, provided that full and clear credit is given to Jane Adams at http://janeadamsart.wordpress.com with appropriate and specific direction to the original content.